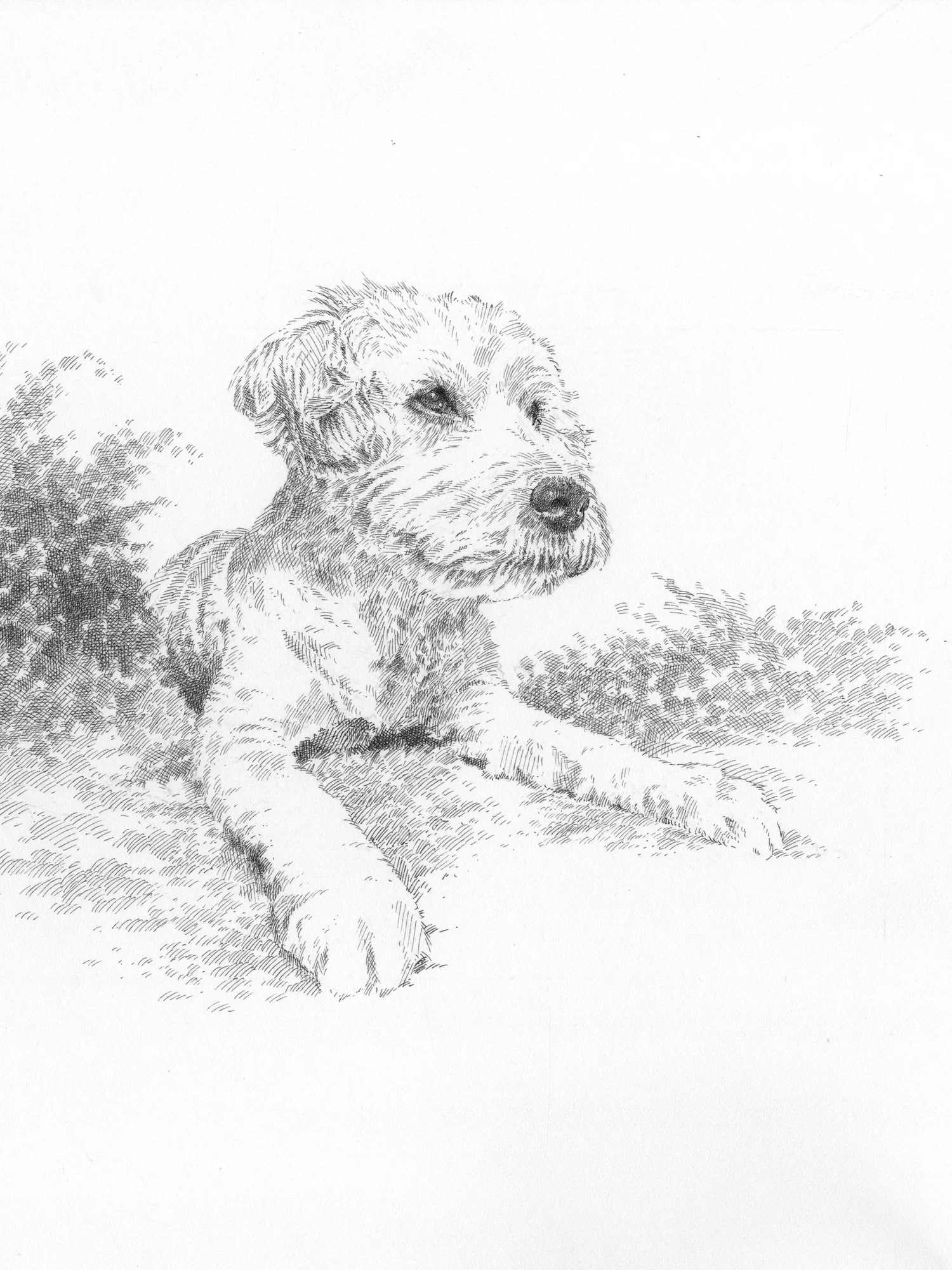 ChroniclesHowler's Hill
The Chronicles of Brooklyn: Lessons from a (Mostly) Good Dog
By Taylor Plimpton

“Be kind, for everyone you meet is fighting a hard battle.” —Anonymous

My wife, Lizzy, has this bright yellow sweatshirt that reads, “Bee Kind,” and has a bumblebee on it. (She also has a sweatshirt that says, “C’est La Vie,” though that’s fodder for another column.) Anyway, I bring this up because “Be Kind” is a maxim that my dog, Brooklyn, embodies with her whole furry, friendly self (though interestingly, she’s not all that nice to bees—lolling about in the sun on an early fall day, she’s been known to snap her jaws at passing yellow-jackets, and I’m pretty sure she’s been stung a few times on her soft, black nose in response.)

Yet despite her apparent distaste for bees (and the fact she’s essentially a big-toothed, savage beast), Brooklyn’s got this giant sweetness about her, nonetheless. And when it comes to humans, she is kind—and loving—in a way I’ve never before encountered.

You can see it in the way she looks at you, her eyes soft and brown and adoring.

You can see it in the wag of her tail—the simple, heartbreaking, unadulterated fact that she is thrilled to see you, a fact her tail cannot hide. (I love this about dogs—that they cannot hide their happiness. If only we humans had tails that wagged of their own accord, maybe we would find it more difficult to convince ourselves we’re miserable, which for some odd reason we like to do.)

You can feel it when she puts her paw on you, gently, or gives you a little loving nudge with her wet nose, or puts her chin on your leg as you sit on the couch, or decides to gives you kisses—those disgusting, wonderful dog licks.

Of course, beneath all this kindness, informing it, is love, I guess—for what is true kindness but love, expressed? “It’s OK,” she reminds us in a million different daily ways, “I love you.” And what a love it is in Brooklyn, and in dogs in general—a love that has no ifs ands or buts, that is not dependent on conditions, that is there no matter what.

So I guess the question is: how do we cultivate this kindness, this love, in ourselves? We humans are so hard, sometimes—so clench-jawed and forgiveless—how do we become soft? Can we learn to love each other the way our dogs love us, with that simple, tender adoration?

The funny thing is, the way dogs look at us isn’t so far off from the way we often look at them—with love and warmth in our eyes. We’re naturally tender towards dogs—even ones we’ve never met—which is why, for instance, we’re much more likely to greet a strange dog on the street with affection than we would a strange human. With each other, we are more reticent to engage; of our own species, we are (understandably) suspicious. Maybe it’s just that we know ourselves too well—all our cruelties and pettinesses—and so are unwilling to give each other the benefit of the doubt. We look at a dog and see innocence; we look at each other and presume guilt.

You wouldn’t think it, but Brooklyn, with all her kindness, can also present this strange, same-species dislike. For while she’s never been anything but gentle and loving to humans, when it comes to other dogs, if things don’t get off on the right paw, my fluffy, friendly little girl-dog can quickly turn vicious, snarly, her sweet, open face now contorted and ugly, her big teeth bared. (Even dogs, of course, can be jerks, a fact that reminds me of one of my favorite scenes from Family Guy: “Hey, other dog! F**k you!”)

Anyway, it’s interesting to me that even the kindest of beings—because I’ve never encountered a creature as soulful and sweet as Brooklyn—can have their vicious side, though I wonder if even behavior like this comes from a place of sweetness, in the end. Consider, for instance, a mother bear mauling someone to protect her cub: is this not kindness, too, somehow—that giant mother’s love?

No, kindness does not mean that there will never be a time when it’s appropriate to bark, to bite, to protect the ones we love from potential threats—all creatures do this, and unfortunately, sometimes must. The problem is that many creatures (including Brooklyn, and most definitely including ourselves) aren’t actually all that good at determining what constitutes a true threat, and what doesn’t. Too often, we respond inappropriately, baring our teeth when a smile and a wag would have been better. Misunderstandings abound. We are all so utterly confused.

Which, when you get right down to it, is exactly why we need to be kind. Because we never really know what’s going on with anyone else—what great battles they are waging, how many of their ships already have been sunk. But we know what it’s like to be human, and in the face of suffering (and suffering has so many faces), what appropriate response is there but compassion?

Yes, knowing ourselves too well—that’s why we have to be kind. Because life is fucking hard sometimes, and knowing this, we need to be willing to ease up a bit and cut everyone some slack. To be gentle with each other, and patient, and forgiving, and kind.

It sounds like a lot to ask, I guess—though Brooklyn doesn’t seem to think it’s such a big deal. There’s the old bumper sticker advising random acts of kindness, and when I think about it, this is what Brooklyn does just by being herself, as do so many other dogs: dishing out sweetness to family and strangers alike, without reservation, and for no particular reason—randomly, if you will—just because that’s who she is, and that’s what she does. That’s who dogs are, creatures of great kindness, and it’s who we could be, too, perhaps, if only we follow their lead.

And when it comes to Brooklyn and the way she’s always cursing out other dogs—well, she could probably use some training. But what do I expect? She is, after all, only mostly good.

Taylor Plimpton is the Human Executive Editor of Love, Dog, where he also writes a column about his dog, Brooklyn. Plimpton is the author of "Notes from the Night: A Life After Dark," and is the coeditor of "The Dreaded Feast: Writers on Enduring the Holidays." He contributes regularly to The New Yorker and Tricycle: The Buddhist Review. He is currently at work on a new collection of essays, "Who My Dog Thinks I Am: True Tales."

Does Your Dog Know When You’re Lying? – American Kennel Club

Hero Dogs Donate Blood to Help Save Other Dogs’ Lives