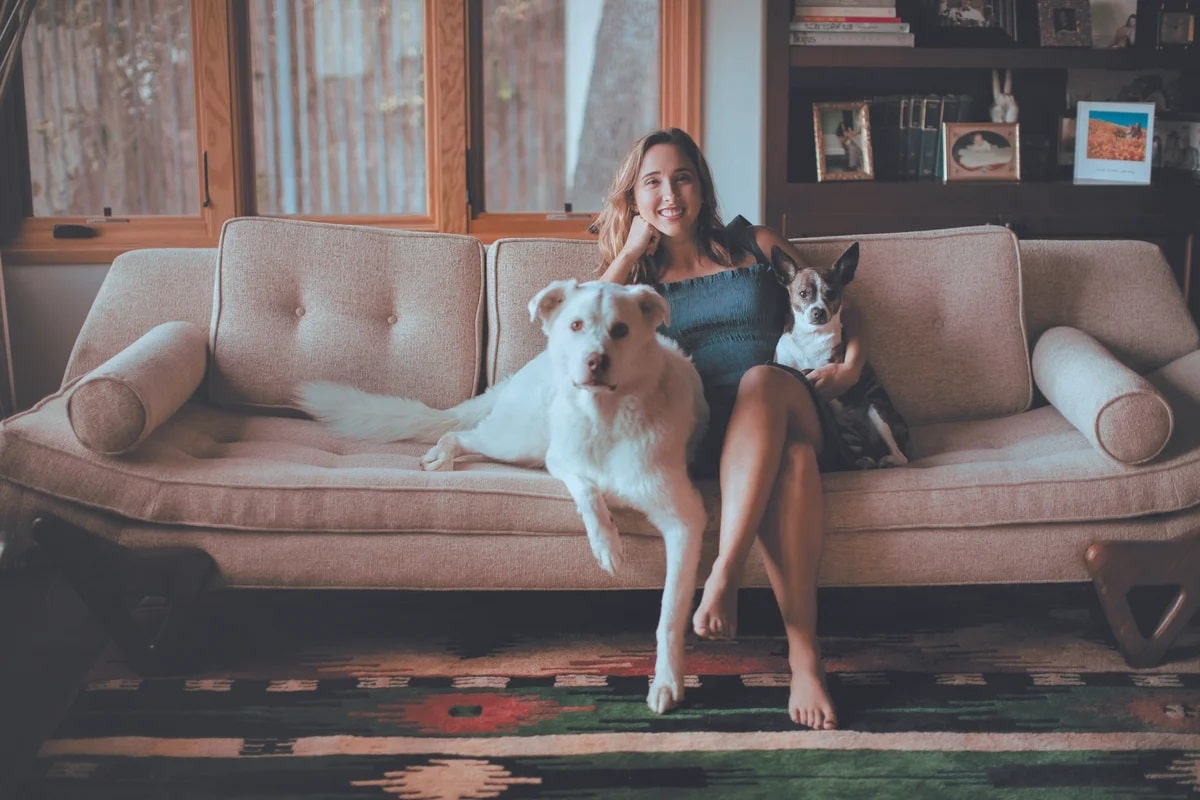 ExcerptHowler's Hill
Covid K-9: Focusing on the Good During the Bad
By Victoria Lily Shaffer

In an excerpt from Victoria Lily Shaffer's new book, Pup Culture, we are reminded of the joy of fostering rescue pups.

My first COVID-19 pandemic fosters were Madonna and her nine puppies—Britney Spears, Justin Bieber, Ricky Martin, Selena, Lady Gaga, P!nk, Harry Styles, Shawn Mendes, and Ariana Grande. I referred to them as the “Pup Stars.” Madonna was a timid dog and an escape artist who had little to no interest in human interaction, but she was the best mom I’ve ever witnessed. She was incredibly attentive to her puppies, always by their side. The Pup Stars never went hungry, because Madonna was right there whenever they needed her. Mutt Scouts rescued Madonna from a high-kill shelter where she was scheduled to be euthanized with all the puppies still in her womb.

Safe in her new foster home, Madonna delivered the nine Pup Stars under the watchful eye of her foster, Riley, a badass twenty-three-year-old, who became a dear friend of mine. Rescue work not only saves lives, but also brings like-minded people together like Riley and me.

When the Pup Star puppies turned one month old, Riley handed them over to me to finish raising them. During this time, California was abiding by a stay-at-home order, so there was really nothing else to do besides play with and stare at these adorable, tiny puppies. My oldest friend Maysie (remember her from chapter 1?) locked down with me at my home, and together we raised these pop star puppies with love and devotion.

From the very start, Maysie and I looked forward to weighing these puppies each day. When evening finally came, Maysie and I were exhausted, sweaty, and covered in puppy gruel (among other less pleasant things), but no matter how tired we were, we’d race to take out a mixing bowl, place it on top of a kitchen scale, and weigh all nine puppies one by one. We asked each other, “Do you think Justin Bieber’s going to reach six pounds today?” or “Will Britney Spears stay the smallest forever?” It became our little ritual. Typically, Maysie read the scale and I recorded their daily weight on a color-coded chart. Giddy with excitement (or delusional from exhaustion), we sang each puppy a song by the artist they were named after, FaceTiming friends to join in on the silly fun. I question if it would’ve been as thrilling had we not all been stuck at home with nowhere to go and nothing to do, but we ran with it. Why question happiness?

The puppy weigh-ins somehow evolved into nightly Instagram Live shows I hosted on my page. The audience grew from just friends and family to dog lovers all across the country, and it happened pretty quickly. During the uncertain time of COVID-19, our little Instagram Live weigh-in became a community of respite. Everyone greeted each other in the comments, shared stories about dogs they had at home, and even bet on how much each puppy would weigh that evening. Though we were all locked in our homes, unable to physically meet, it felt like Maysie and I had an army of puppy lovers there with us during each weigh-in, rooting them (and us) on. It felt like we really knew them.

Because of this love, there was a comfort level that allowed me to be myself—goofy, creative, and often in my pajamas picking on Maysie. I nicknamed Maysie “Vanna White” because she was the ultimate puppy weigh-in assistant. We created segments out of thin air, like when we celebrated a puppy growing from one pound to two. We called it joining the prestigious “two-pound club,” and everyone cheered in the comments as Maysie held up the puppy to do a little celebratory dance. Each weigh-in concluded with a roundup, which always began with me shouting, “R-R-R-ROUNDUPPPP!” as if I were an announcer at a sporting event. I named off the puppies from smallest to largest as Maysie held them up like Rafiki holding up Simba in The Lion King. It was wacky but so very special at the same time. That nightly live stream is what got many of us through lockdown.

Because of the puppy weigh-ins and the surprising number of dogs quarantining in my home, several morning shows suddenly wanted to feature us. It turns out that our story was a breath of fresh air during an otherwise depressing and confusing time. I accepted the offers to come on the air and tell my story in hopes of spreading the word about the importance of rescue and adoption (the same reason I wrote this book).

During the Tamron Hall Show pre-interview, one of the writers asked my permission to title the segment “How Fostering Saved My Life.” Even for daytime television, I thought this was a bit extreme. I was hesitant to agree to it, thinking viewers might conclude I was being overdramatic. But the producers were insistent, feeling strongly about the segment’s positive and life-altering message.

After some debate, I agreed. I started to realize that with the coronavirus spreading as rapidly as it was, perhaps fostering really did save my life. When COVID first hit, I’d already committed to fostering Madonna and her puppies. Though it was scary to be across the country from my family while grocery store shelves began to empty and panic ensued, I was firm in my decision to stay in California and care for Echo, Rue, and my ten fosters. They needed me; it was the right thing to do.

My family is spread around the East Coast in New York, Florida, and Maryland. Across all three states, my parents and relatives caught the virus. First, my aunt in Miami was put into a twelve-day medicated coma; then my dad contracted the virus, followed by my mom being hospitalized with it. As soon as we thought we were out of the woods, my aunt and uncle in Maryland went to the hospital with the virus, too. Two of my best friends, Gabby and Rachel, also came down with coronavirus. To say that I was concerned would be an understatement. The unknowns made it all very scary.

I was the only person in my social circle in Los Angeles who was related to and knew people affected by COVID-19 this early on. People were telling me I had bad luck. It was the most frightening thing I’ve ever had to go through. Not having answers, struggling to secure my mom a bed in the hospital initially, afraid to call in the morning not knowing if everyone had made it through the night—I don’t wish that uncertainty and fear upon anyone.

But throughout that uncertainty and fear, the puppies helped the days go by, and my new Instagram community provided support. Had I not been preoccupied with my fosters in Los Angeles, I would’ve fled home to New York as soon as my dad fell ill since we didn’t know what it was at the time. If that had been the case, there’s no doubt in my mind that I, too, would have contracted the virus. Who knows where I’d be now?

Beyond the risk of catching COVID-19, everyone around me felt incredibly down as they adjusted to this new world. Jobs were cut, social gatherings were cancelled, and once-busy streets became abandoned. Yet somehow, despite all of this, I managed to create a little bubble for myself, and in that bubble were Maysie, Echo, Rue, Mama Madonna, and nine puppies. Everything I needed, except maybe a boyfriend.

The stay-at-home order fostered creativity in me and also turned Maysie into an excellent cook. While Maysie was whipping up delicious meals in the kitchen, I created an Instagram TV series called COVID-K9. Every week I taught doggy DIY projects to keep your dog entertained, using household items in the comfort and safety of your own home. Once I let go of the pressure of perfection and gave Maysie’s arm a break after insisting she hold the camera so still, I had so much fun doing those projects and watching others try them, too. Between the Instagram Live streams and COVID-K9 series, Madonna’s Pup Star litter had become my muse. Thanks to them, I can look back at quarantine and focus on the good instead of the bad.

You can purchase a copy of Pup Culture here.

Victoria Lily Shaffer is no stranger to show biz, having practically grown up on the set of The Late Show with David Letterman. She’s the Vice President of Creative Development at Oso Studios where she most notably produced a Facebook Watch series entitled Extra Innings with Bill Murray and Brian Doyle-Murray. Shaffer was the former host of Pet Life Radio’s Tails of the City, which streamed on iHeartRadio, and she’s also worked on productions such as the Tony Awards, the Emmy Awards, Jimmy Kimmel Live!, HBO’s Divorce, and Netflix’s My Guest Needs No Introduction with David Letterman. Victoria has combined her love for show biz with her passion for animal rescue advocacy, creating content to inspire others to #AdoptDontShop. Follow Victoria on Instagram @VictoriaLilyShaffer to meet her latest fosters (usually involving large numbers of adorable newborn puppies). Pup Culture is her debut publication.

Dog Rescued In The Middle of the Atlantic Ocean