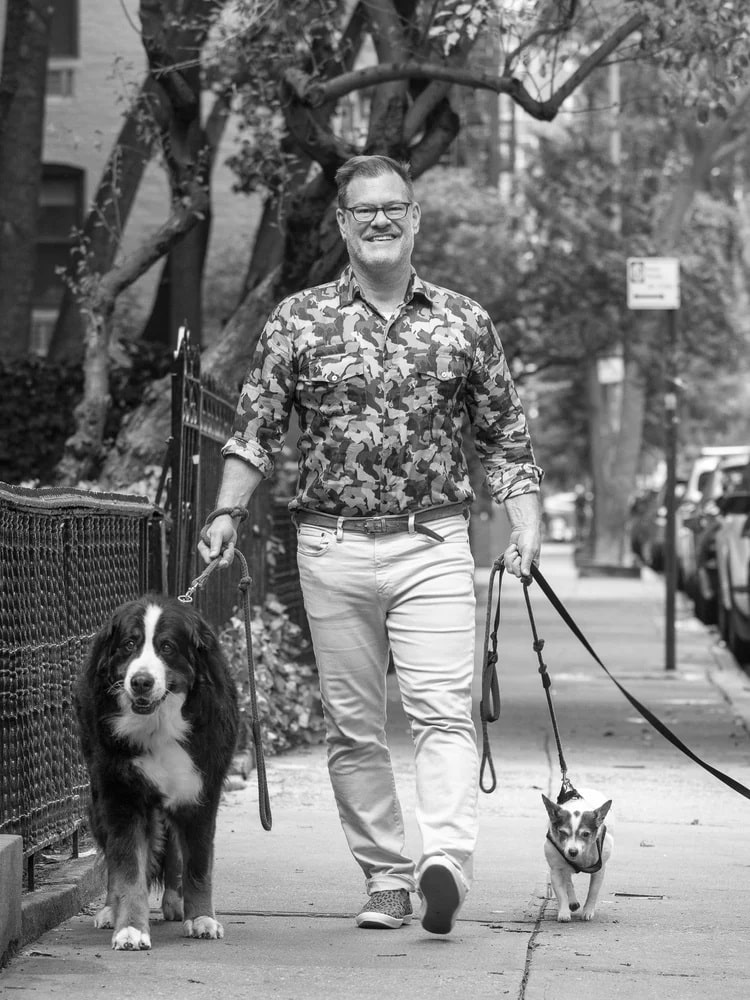 John at Yonkers Shelter with Little Cola, who was adopted out quickly as she was a sweetheart.

A true example of compassion in action, fashion designer John Bartlett dedicates much of his time to rescuing dogs and advocating for their wellbeing. His dogs have also been by his side when he's needed them most.

John Bartlett has a voice as deep and rich as good coffee. When he’s not heading up the Fashion Department at Marist College or raising money for animal rescue organizations, he uses this voice to interview people about their canine companions in a wonderful podcast called “Dog Save the People.” Considering that Bartlett has spent much of the last eleven years working to save the lives of at-risk dogs, one might think the podcast should be named “People Save the Dogs” instead. But then John tells you how, again and again, he’s talked to folks whose dogs have helped them survive cancer, depression, homelessness, the loss of loved ones. And then John will tell you how really it was a dog that saved him, and changed his life forever, and then you will understand.

Award-winning fashion designer John Bartlett’s life in animal rescue all began when he adopted Tiny Tim, a pit-bull mix whose mangled front right leg had been removed on Christmas Eve. “When I walked into the shelter, our eyes met,” remembers Bartlett, “and it was love at first sight.”

Before Tiny Tim, Bartlett had had great success in the world of fashion—winning prestigious awards, flying first class around the world, everything available to him at a moment’s notice. “While I’d worked hard for all this, I started to buy into my own press and became more concerned about editorial success rather than personal success, personal happiness.” But with a certain three-legged pit-bull in the mix, Bartlett’s priorities began to shift. “When we have an animal in our life, they bring us outside of ourselves and connect us to the world around us—they really are this wonderful gateway to a more humane life. And they teach us so much.” From Tiny Tim, for instance, John would go on to learn about unconditional love, living in the moment, joy. “In the morning, before I would even open my eyes, Tiny Tim would know that I was awake, and his tail would start thumping.”

People talk about rescuing dogs, but so often it’s the other way around—that when you rescue a dog, it’s really you that’s getting rescued—and so it was with Bartlett and Tiny Tim. “Tiny Tim allowed me to develop as a man, as a mature adult, because I was finally taking care of somebody else instead of just myself.” The person The Wall Street Journal once called “a fashion bad boy” was growing up.

Among other shifts, Bartlett became vegan and dedicated himself to an existence free from animal cruelty—”How could I love this dog and be eating all these other animals?” He stopped wearing leather, gave away all his shoes and belts and bags and jackets, and made the decision, far ahead of the rest of the fashion world, “to learn to design from a different point of view, without using materials that had any animal derivatives. I had to seek out new ways to express myself, but it was really wonderful because I had such a mission in my head about how I wanted to revisit my work.” Bartlett also began working with different animal advocacy groups, including the Humane Society and PETA, as well as with the North Shore Animal League, where he’d adopted Tiny Tim.

John Bartlett grew up in a somewhat conservative Midwestern suburban setting, so when he graduated from college and told his parents he wanted to go into the fashion industry, they didn’t really “get it”—but they were supportive nonetheless. His father offered two pieces of advice that still resonate with the critically acclaimed fashion designer today. The first: “Do whatever you have to do, be humble, and anything that comes to you, say yes.” The second piece of advice was simply, “The greatest way to be of service is to do something you really love.”

“There are so many ways for people to give back.”

When I ask John about how your average person can get more involved in animal rescue, it is this maxim to which he returns. “When you’re able to do something you really love, you’re giving back to the community in a way that’s yours and that’s coming from your heart. A lot of people will say, gosh, I really, really want to do something, but I don’t know how to get involved, I don’t know if I have the time, I don’t know if I can see myself working in a shelter—but there are so many ways for people to give back, and a lot of it is harnessing your talents—like if you’re a writer, volunteer to write something for an organization or a shelter, or if you’re a designer or an artist, create something and auction it off.” At the bottom of the Tiny Tim Rescue homepage, there’s a list of other ways people can help: spreading the word on social media, making donations, fostering, organizing fundraisers. “There are so many ways to be of service,” Bartlett reminds us. “And you know how when you rescue a dog, you get rescued right back? Well, I feel like it’s the same kind of dynamic here: When you give, you get.”

Until recently, Bartlett had three dogs—a Bernese Mountain Dog named Hug, a three-legged Chihuahua named Rudy, and a senior Chihuahua-Jack Russell mix named Millie whom he’s had for about twelve years, and who just passed on in July. “It was a really wacky group,” John explains, laughing. “When I’d try to walk them on the street, they’d all be going in three different directions at three different paces, and it was a comedy of errors.”

As someone who’s seen firsthand the immense suffering and loneliness that shelter dogs go through on a daily basis, Bartlett believes strongly that if you’re thinking about getting a dog, you should always consider adopting first—and he’s grateful that this trend has become much more widespread. But he’s not militant about this stance, either. “I’ve realized that everyone’s on their own trajectory, and it’s really none of my business. Besides, I love all different types of breeds.” John has a purebred, too, after all—Hug—a fact he sometimes feels obliged to explain to his friends in rescue: “The Bernese Mountain Dog is my husband’s spirit animal.”

The dogs also reminded Bartlett how fleeting life is…

Bartlett’s husband, John, passed away four years ago of cancer. In a time of impossible sorrow, Bartlett’s dogs were there to rescue him once again—in large part, because he had to be there for them. “A lot of the healing from losing my husband really came through the dogs, because I had to show up—I had to get up every morning, take them out, walk them, be responsible for them. At the same time, I think they knew that I needed a little bit extra, and they would be on top of me like a weighted blanket. It was so remarkable.” The dogs also reminded Bartlett how fleeting life is, “because their lives are so short compared to ours.”

He used to wonder what happened to his dogs when they transitioned to the other side, but now he knows: they go running into his husband’s open arms.

As John and I talk about the world of rescue, one of the themes that surfaces again and again is transformation. For instance, while some dogs are so damaged that they’re currently unadoptable, still, there remains hope for each and every one. “To see some of them transform and become loving pets that go into homes—there’s nothing like it,” Bartlett explains. “And there are beautiful stories: There was a dog named Olive who was at Yonkers Animal Shelter for ten years before she was finally adopted. And she had the greatest three years of her life after that. So you never know. My friend who still volunteers there said, You know, there’s a person for every dog. And I love that, I believe that.”

John Bartlett wishes he could be that person for more than just his three dogs. Indeed, it’s his fantasy—to one day have a big enough space so that a large number of at-risk dogs can run free on his property. It is a vision of a kind of heaven.

Actually, he’s seen this place already, he tells me, this canine paradise on earth. He’s been there. It’s in the most unlikely location, too—the former dogfighting compound once owned by the star quarterback Michael Vick. A few years after his arrest, the nonprofit Dogs Deserve Better bought Vick’s estate and turned it into a sanctuary for dogs who had been living a life of abuse or neglect. “I’d go down there every couple of weeks,” John relays, “and I would watch these dogs—many of them are unadoptable, just because of the damage they’ve incurred—but they have this beautiful life now. They’re living in the mansion of Michael Vick—many of them have their own rooms—and then they go out into this enormous field that used to have dogs chained every twelve feet, just close enough that they could almost get to each other but they couldn’t—and now it’s been transformed into this beautiful, beautiful place of healing.”

This is the kind of place John wants to have, too, one day—it doesn’t have to be a massive estate or anything, of course—just big enough for a small sanctuary or shelter: a space where dogs can be dogs and run free and romp and play, where they do not have to be afraid anymore and can heal, where they can smile their big-toothed grins and lay about in the sunshine, or the shade, where they can love and be loved, save and be saved.

“To have this kind of sanctuary where I live so I have this around me all the time—that’s my fantasy,” says Bartlett, and in his warm, deep voice there is the wistfulness of dream. “I think a lot of people have that fantasy.”

Taylor Plimpton is the Human Executive Editor of Love, Dog, where he also writes a column about his dog, Brooklyn. Plimpton is the author of "Notes from the Night: A Life After Dark," and is the coeditor of "The Dreaded Feast: Writers on Enduring the Holidays." He contributes regularly to The New Yorker and Tricycle: The Buddhist Review. He is currently at work on a new collection of essays, "Who My Dog Thinks I Am: True Tales."

From My Dog House to Yours

I’m Ruby! I’m the star of this month’s Companionship story, Ruby, My Dear, along with...
Team Lovedog

Dog in the Valley

From the mountains of post-war Germany to the tranquil shores of the hamptons, this bestselling...
Lucian K. Truscott IV